Growing up in Sunday school I learned the term “my calling”.

It’s a thing that you’re destined to do, something that God draws on the map of who you are. Youth group leaders would talk about how they felt “called” to do certain things and the idea was that if you prayed and listened enough, you’d hear your calling.

When I dropped out of school to pursue music production and songwriting, I felt called to do it. When I wrote songs for people I loved, I felt called – like the songs were pulling their way out of my skull and I was called to help them through. When I spent did things for Hailey I felt called.

Likewise, something in the back of my head had always had its finger pointed at a map. A place removed from day to day chores and silly responsibilities. Off on a train or a bus somewhere in the north-east, observing, writing songs, living my life. It was in that spirit that I moved into a co-op called the Peanut Butter Palace in January of 2018, and it was there that I met Angeline.

Angeline and I were roommates. That is to say, we actually shared a room separated into sections by curtains. The first day I moved in, there were several plastic tubs stacked up in my new room and I started to move them out.

“What are you doing?” Someone called from the other side.

“Uh, I dunno, I guess just moving these tubs out so I can vacuum. What’s this?”

“Those are my boxes of worms. They’re transitioning, they need to be kept in a dark place. You can leave them there.”

Boxes of worms.  That’s how I met Angeline. I learned later she was a mountain climber, an ultramarathon runner, a scuba diver, an aspiring mycologist, a traveling lacrosse umpire, and the free-est spirit I’d ever met. Still, that’s just the exterior – and it’s the inside that would inspire the art.

We’d stay up and she’d tell me stories of living out of her car, traveling in countries where she didn’t speak the language, doing drugs I hadn’t heard of in desert raves, hiking for weeks on trails out west. She had lived so much life in ways I hadn’t, and vice versa. I had never met someone who had such a passion for finding ways to live sustainably either. From setting up a bathroom compost for hair and fingernail clippings to taking sailor showers turning off the water while scrubbing, she made an entertaining game out of all of it. Something about her was antsy and nervous, but she was full of energy and personality and stories and we became friends.

I love to learn. Angeline loves to explain things to people. I eventually let her convince me to try a membership to a local climbing gym. A few of us from the Palace who called ourselves the Pod Squad (me, Angeline, and ) would carpool over to Longwood and spend a couple of hours climbing. Angie was the best climber I knew there. She had worked professionally as a Matterhorn climber at Disneyland, she had been a route-setter and was certified in rope access safety.

I, therefore, learned to love climbing. The blend of puzzle solving and body weight training. I enjoyed the discipline of it. The patience of it. We’d climb a few times a week, grab food at Del Taco, and then come back and hang out. We both loved to stay up late. We’d stay up whispering telling stories and laughing. We talked about our past relationships, our favorite bands, how we had no idea how each other liked one another’s music.

She had some problems with a couple cavities and I worked out something with my dad to get it done. She came up and did some work for my parents, and I assisted as my dad filled her teeth.

Eventually, Angeline and I became better and better friends until one day we weren’t sure what we were anymore. We stayed that way for a long time. We went sailing together. Then we went to the beach together and then fought all the way home. But several weeks later we decided to go on a trip again together to Georgia to climb and for her umpire some lacrosse tournaments. And that is where the story begins.

We got started late in the day today and when we got to the campsite it was dark. I don’t know a lot about camping, but I know it’s best to get where you’re going before dark. Also. Angie’s car is low to the ground and this camping area we arrived at in the dark was neither flat nor paved. And I was driving. As we were pulling up to the area where we were going to camp (really not a campsite), she warned me, “Do not to bottom out the car.” Gulp.

“Just find any spot and let’s get to sleep,” she said.

We had to be up at the crack of dawn the next morning to make it to her game on time. I was pretty tired from driving and was happy to hear it.

“No, not this spot. It’s not level enough. Go back down the main road we came in on. I think I saw a good one”

I turned the car 180 degrees assuming that would put us in the general direction. I really had no idea where we were. It was pitch black and the road had forked several times and left my sense of direction back where the GPS signal gave out.

Once we finally found the camping spot though…it was beautiful. 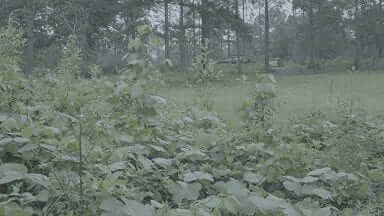 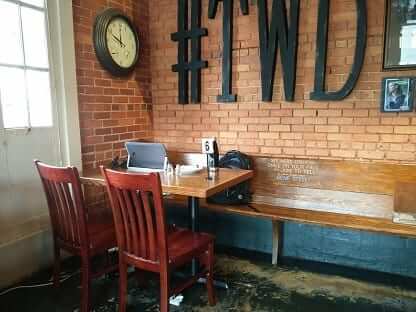 This morning we got up and booked it to Senoia, GA fast enough to get breakfast beforehand. She is a coffee drinker and I am a wifi-user. Plus coffee shops are a welcome combination of hipster fancy-ness and bathrooms. Both are fun after crawling out of a tent.

After breakfast, I dropped her off just up the road and came back to start working on music for the day.

It’s fun to work in coffee shops. Today I’m working on trying to finish the music for a song I think I’m going to call Leaf.

I’m not sure what it’s about yet. I’ve been toying with a few melodies but the drums are the thing that I’m most fixated on. It has this cool really wonky drum loop and this really serene peaceful acoustic guitar part.

The town here is really interesting. A lot of The Walking Dead was filmed in this town and they’re slow to forget it.

Don’t get me wrong, I think the walking dead was a cool show and all. But what is going on for on a Friday afternoon? 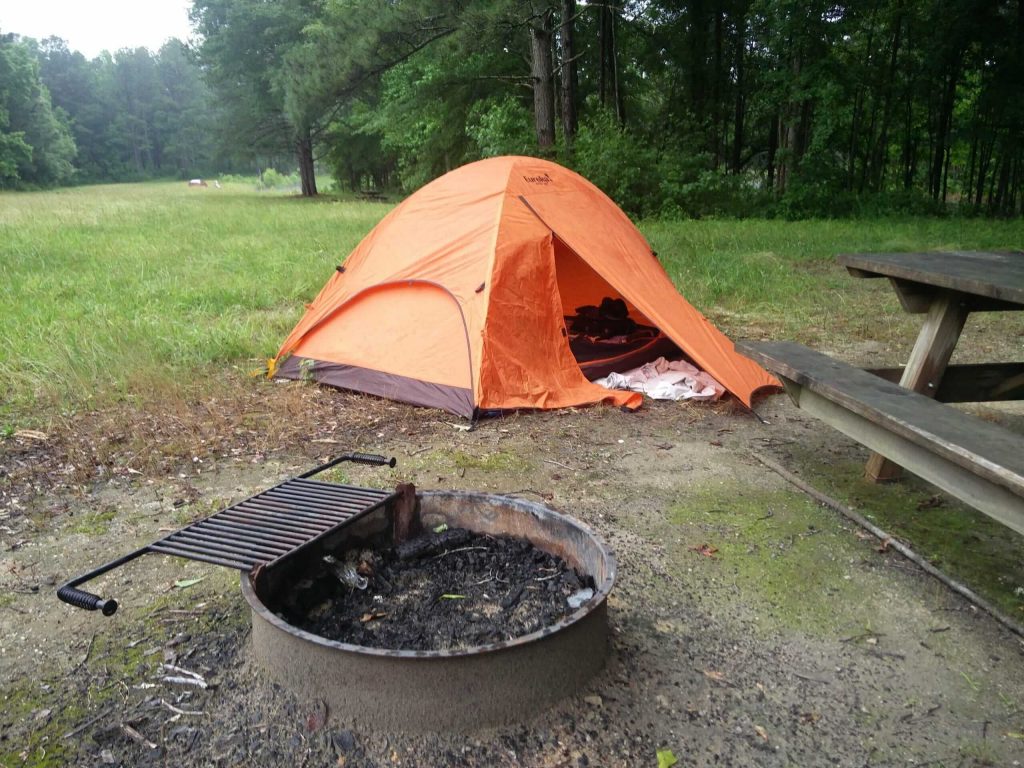 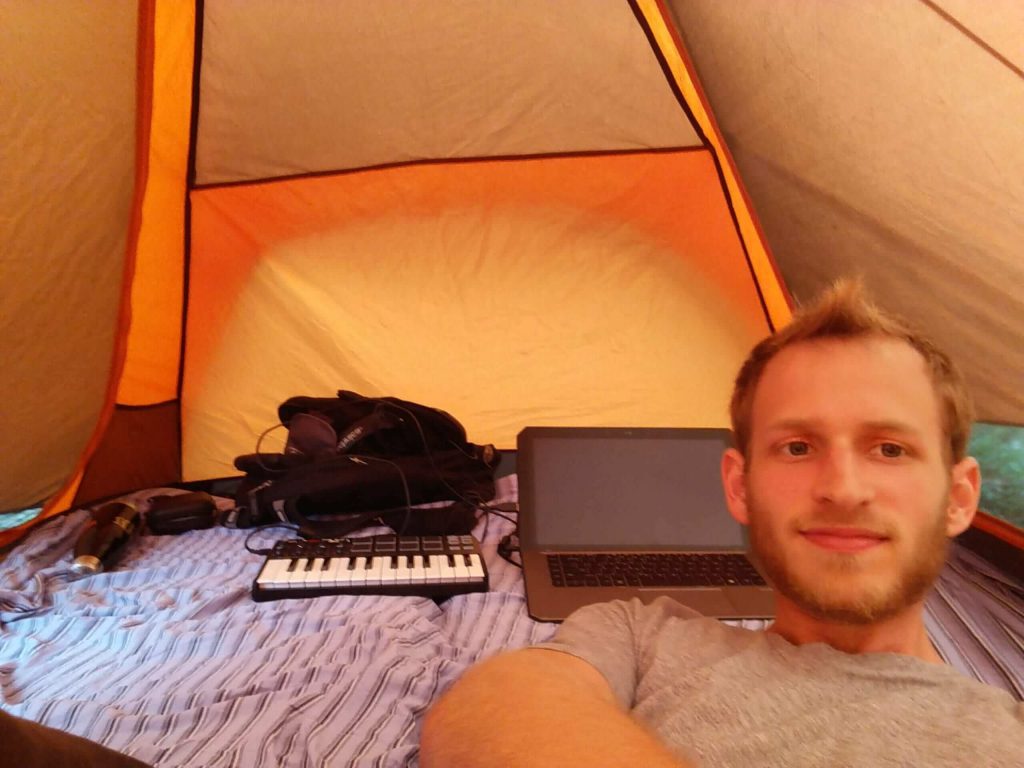 Probably my favorite lines from LEAVES so far are

Stand on the car just marveling

Be still my thoughts are with you

Move as the leaves do in the breeze

For me these four lines just sum up so much of how I feel on this trip.

They come mainly from what happened last night at our campsite.

First of all, we had another unbelievable spot with no one around.

When it got dark we realized our only company was a million tiny fireflies dotting the treetops surrounding the meadow we camped in.

We stood up on the picnic table there and held each other while a lightning storm performed in the distance.

Thinking about how leaves move in the breeze. They move with joy in whichever direction the heavens move them. They dance even. They are not so stiff as to miss out on it.

I wanted the drums and the rhythm of the song to sway the way a plant does in the breeze. I’m not sure I really captured that, but the intention was a turning point for me creatively.

Back in Orlando we used to climb in the gym a lot. Outdoor climbing is a lot more creative. Not to mention the connection with the outdoors. Nothing brings the climbing experience into focus like vultures circling around overhead while you climb.

We climbed until sunset and then just as the sun set hid our gear in some bushes and ran to the top of the mountain. She seemed to me to be a little spooked about bears. We kept hearing rustling but it was just the wind blowing branches around.

A quick run down the mountain in the dark to use what battery our phones had left in them, then a quick charge in the car which gave us the juice to call around every bar we could find on google to try to find an open kitchen with something besides meat to eat. We headed to the next closest town which was Helen, an awkward mix of medieval German imitation and southern river tourist trap. You’ll have to google it yourself, I wasn’t sure what to take pictures of. 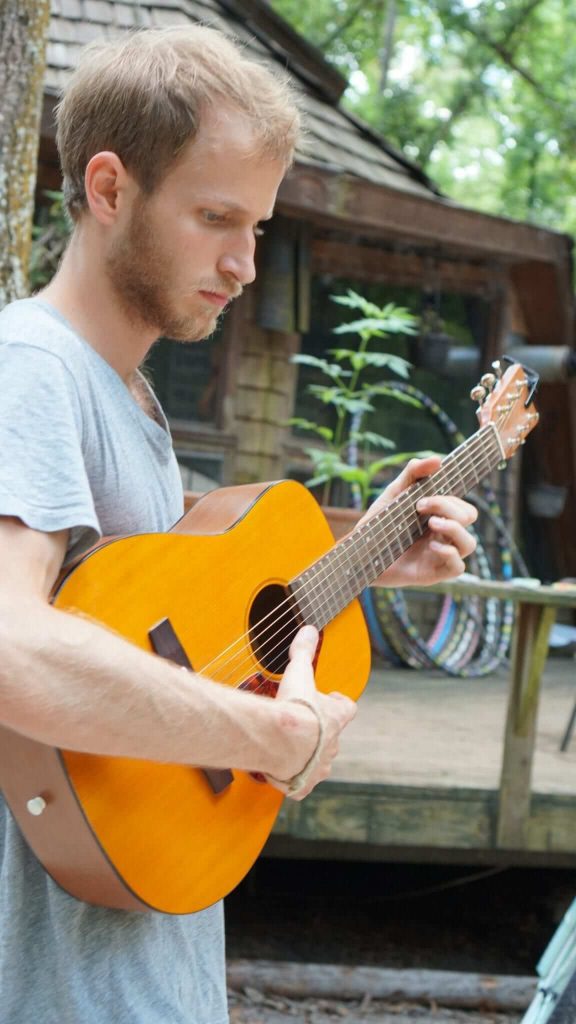 Hostel in the forest.

We rode a really long way today and ended up visiting this place I had heard of called Hostel in the Forest in Brunswick, GA. When we got out the mosquitos were so bad that we almost got back in the car and kept driving.

A quick check in at the front desk and I was ready to find a bathroom. “We pee on trees around here,” the dude at the front desk told me. Ok fine, I thought. Peeing on trees is one thing. Getting eaten alive by dick-biting mosquitos is another. I actually invented all of the Fortnight dances that evening peeing in-front of the check-in office waving my hat around at the swarm of mosquitos quickly gathering around my vulnerable situation.

LEAVES was the first full-production song I had finished in a while. I had written the guitar part a long time ago and actually used it as an intro for live sets with my band.

I always knew I wanted to use it in a song at some point. The trip just felt like that guitar part made me feel so I finally had a home for the lick.

The drums were inspired by Jon Bellion. I love how he can make wonky rhythms feel more human than normal ones.

My buddy Lu helped finish it up once I got back. He played bass and did the mixing.

Unfold your arms and listen

Wake up to dream a deeper dream

Let go of all you made believe

How long did we sleep in the woods?

Stand on the car just marveling

Be still my thoughts are with you

Move as the leaves do in the breeze

Three names says she from the future

Leave a taste in my mouth like I’m drinkin kombucha

Gave me a present said we got no future

Got me stiched up so like gimme a sutcher

What’s that to ya that’s minutia

Cause this ain’t bout possession

Ya freedom is crucial

Still wrestle hard in the fuschia back of the fitty is lucha.